These compositions, mostly for instruments, are transcriptions of some fragments from assumed English translation of ancient Chinese music book, “Yue Jing” (Classic of Music.)

Four Books and Five Classics are the authoritative books of Confucianism in China written before 300 BC. One of these books is Classic of Music (Yue Jing or Yüeh-ching) which written about music, only the book is not survived, it was lost probably in the Burning of the Books in the Qin Dynasty.
Japanese scholar, OGAWA Sotaro (1873?-1909) was a dilettante of Chinese literature and Japanese traditional music, he studied medicine in London from 1905 to 1908, then moved to Paris and committed a suicide at the Seine in the summer of 1909 because of his paranoia which was caused by racial discrimination.
He published a translation of Classic of Music as a limited edition in London in 1908. He wrote he found fragments of Classic of Music in Dalian, China where passed to take Trans-Siberian Railway in 1905. He translated them into English (though his English ability was poor, maybe one reason of this translation is for his English practice,) only these translations were survived. After his suicide, the original fragments were not found from his left articles.
The authenticity of the translation is not confirmed. One reason is that the Chinese original has not been found yet. Another reason is the content of the book is quite weird. Some of the descriptions are almost heralds of 20th century’s experimental music.

The fragments includes;
An ensemble is conducted by heartbeats of one player. It shows a harmony of group.
Funeral music, players make only gestures playing music without sounds.
Melodies to confirm the life and death of inhabitants in remote areas.
Music in the form of a snake.
The temperament that should not be used except in dream.
Method to play a flute by using a percussion.

Instruments: No.1 = unspecified two instruments + noise, No.2 = unspecified five instruments
Notation: No.1 = staff, No.2 = audio (the audio score has to be distributed to each performer during the performance)
Duration: ca. 20 minutes
Commissioned by Tokyo Gen’On Project

Ancient Chinese Experimental Music No.1 is composed with a suggested scale and a training method to get a quiet mind. No. 2 is based on rhythmic cycles of “San Fen Sun Yi” which is ancient Chinese tuning system (it is the same with Pythagorean tuning as a result). One fragment suggested to extend a tuning system to a rhythmic structure for understanding of cosmic order with musical practice. Each instrumental part has a different cycle with the tuning ratio, and a basic cycle is 8.64 seconds (1/10,000 of a day, 1/100 of a day is ancient Chinese basic time scale). To realize the polyrhythm precisely, audio scores are provided for each part.
Two pieces may be performed separately, these are partly overlapped in this performance.

Instruments: unspecified three instruments with 3, 5 and 7 equal temperaments
Notation: staff and text
Duration: ca. 15 minutes
Written for “(micro) sketches for the next time around” conceived by Osvaldo Budón, commissioned and organised by Berliner Künstlerprogramm des DAAD

This story corresponds to 5 and 7 equal temperaments which are used in asian music still, also ancient Chinese music theories by Ling Lun and He Chengtian.

3, 5 and 7 equal temperaments are adopted in this one composition. The ritual part is replaced by simple actions which may be allowed morally in this mediocre modern society. Any animals are not killed for the performance.

The composition was developed by a collaboration with Osvaldo Budón and Annette Krebs.

No.4 is based on a story about a ritualistic sound installation.

People in Fanyang (a village in ancient China) build a bamboo instrument called “Xiang” (Fragrant) on a river cliff facing southeast once every 67 years.

Cut 73 of 1 li (440 yards) high bamboos 5 years before. Remove some nods of the bamboos, put elephant fleas with saliva of snipes in the bamboos. They eat all nodes in the five years.

Then, 59 days after the 7th new moon of the year, bury the bamboos in the hill of the river cliff diagonally, pointing exactly towards the east.
At the bottom edges which is covered with bills of ducks, put mixed powders of fermented cedar and tortoise shell, the top edges should be at 3 cun (2.1 inches) above ground. The installation has to be done in 97 ke (23 hours and 16 minutes).

In the next 11 days, a strong wind blows. When the wind falls, a breeze lasts. Then the bamboos starts to sing.

The sound is nearly like the song of carp, but it is lower and fainter.

The song invites a Qilin (Chinese legendary creature), the Qilin guards the village in the next 67 years.

When they were installing the bamboos, one dropped one bamboo in the river. The people buried 72 bamboos not 73 because they thought they had no choice. The village was vanished by floods after 13 years.
(Actually they should be saved if they buried 71 of them instead of 72.)
Actually they would have been saved if they had buried 71 of them instead of 72.

Every one day before and after new moon nights, one or some musicians play music with a shape of snakes in a prairie on nights. The instrument that they perform, is called Xū duó, a bamboo flute. All born deaf peoples have to learn the instrument, the instrument is only for them. They spent most of the time watching snakes in the prairie. Peculiar snakes inhabit in the prairie, they are tiny, and the colours of them are blue, red or yellow. The musicians observe their shapes and movements carefully, then transcribe them into music. Occasionally, the snakes make faint noises which sound like many small bells. The musicians cannot listen to the noises and even the music they play, but feel their breath, wind and vibration of the instrument, then, the music sounds like the voice of the snakes.

The snakes wiggle with the music in the nights, usually, they make a circle. According to legend, rarely the circle floats in the air, rarely they twinkle in the dark. If the musicians can watch the floating circle, they might get a hearing, but it is not their object, the object is sympathy between deaf humans and deaf animals. They play music together. It is believed the sympathy leads to a shape of the universe.

Some say the phenomenon also happens during a total eclipse.
One day, a musician dropped the flute while playing the music. The flute turned into a snake, then sneaked from his nose, consumed his lungs immediately.
It is said that the instrument was made imitating the shape of the snake originally, therefore, it was called the void of bells.

Detail photos of the 3D score 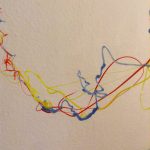 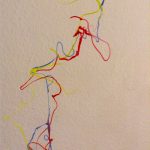