Site-specific compositions are one of the backbones of Adachi’s musical activities. These compositions are not only composed for particular places but also the processes to involve the peoples from local communities and to make the performance together are a huge part of the composition. They are interventions to architectural structures of the sites and the society. This is why normally these compositions are simple and playable for amateur musicians. These are largely inspired by “Symphony of Sirens” by Arseny Avraamov. 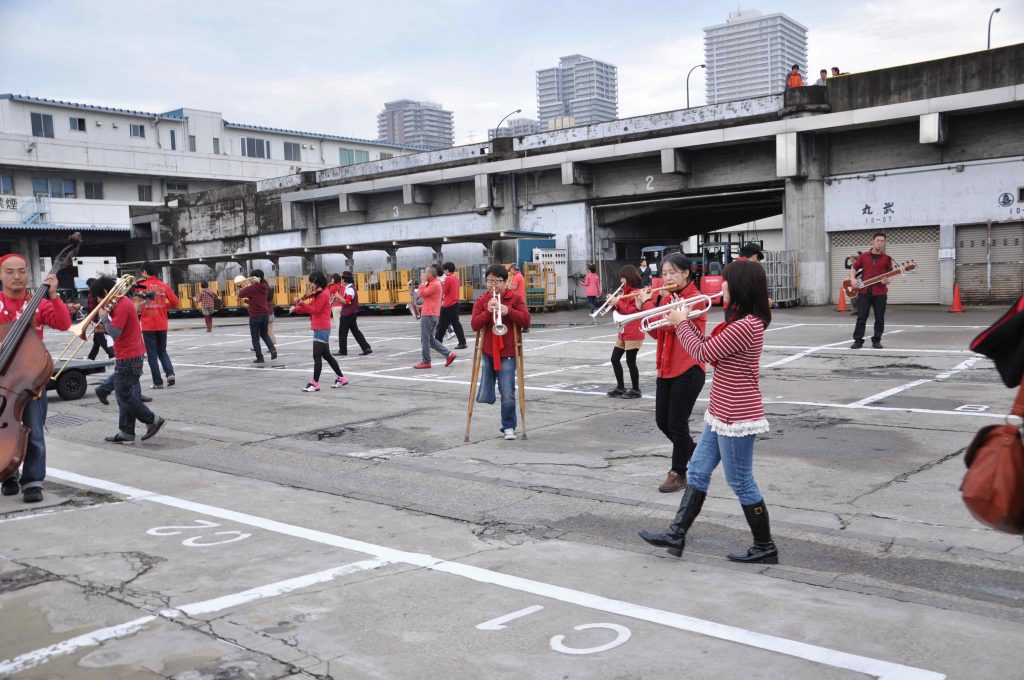 For 10 tubas, orchestra, choir and cars, one conductor and three sub-conductors. Duration: 1 hour
NUo is the largest scale Adachi’s site-specific composition and the first work of the NU series which is continuously held in the Senju area in downtown Tokyo for 10 years.
The performance involved more than 70 amateur musicians, the composition was made for particular architectural structures of Adachi Fish Market (40,000 square meters, coincidentally it has the same name as the composer) as spatial music. Tuna hot pot was cooked and served as a part of the performance.
Commissioned and organized by Tokyo Culture Creation Project, Downtown Senju – Connecting Through Sound Art, and Tokyo Art Point Project. 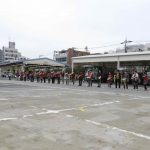 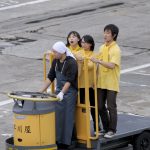 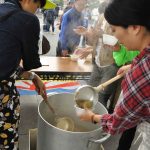 For choir with vuvuzelas and bicycles, 4 trombones and 2 soloists.
Composed for Tempelhof Airfield, Berlin, performed on 2012-8-18 as a part of “Berlin sonic places” conceived by Peter Cusack. This piece focuses on the distances of sounds and the sounds with winds. All sounds were played with winds (breaths). The sounds were made at the places maximum 700 meters (in the beginning,) minimum several centimeters (in the last part) away from the audiences’ ears. In some parts, near sounds cover up far sounds.

A 6 hour composition for 19 musicians particularly written for an old Japanese private house which has many small rooms and a terrace in Senju. The notations include staffs, photos, graphics, systems and materials for improvisations. One hour slot of the six hours was composed after the performance began, then, the scores were printed and distributed. Therefore, the performers were not able to know what scores the other performers were following for that part.
The composer made 1 minutes remix for the 6 hour recording, the CD includes the mix.

It is a coherent 15 minute composition but played by 3 geographically separated groups at the same time. The groups positioned three small art spaces in the Senju area, they were a few hundred meters apart from each other. First, the audience were ushered into each venue and listened to rehearsals in turn. During the simultaneous performance, the audience were asked to stay at the geographical center point, imagine the music. 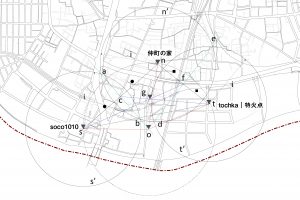 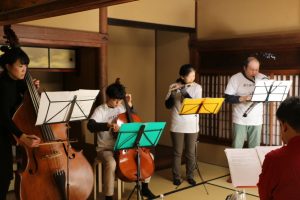 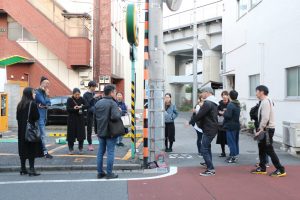 The site-specific music app “NUa”, free and for iOS and Android is an experimental music work by Tomomi Adachi for mobile phone. This App requires listeners physically go to the locations to listen to the sounds. It has been composed originally for the Kitasenju area in Tokyo, but additionally, it works in Berlin (Hauptbahnhof, Treptower Park and Ringbahn), Moscow (from Red square to Moskva river via Albat), New York (Wall Street, the Battery and Ellis Island) and the South Pole.
This is the fifth composition from the series of site-specific works that began with “NUo” at Adachi Market in 2011 for Oto-machi Senju no En by Adachi. The last four compositions were performed with professional or amateur musicians mostly from the local. Each composition had from 70 to 15 musicians as the performers. (See also site -specific compositions) 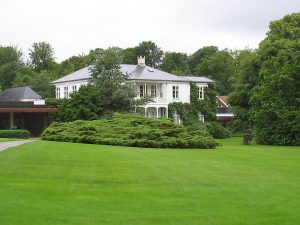 It is an audio piece commissioned by Louisiana Museum, Denmark. The piece is played through a tablet in the front of the old building of the museum. It is a quasi-fictional narrative piece about Alexander Brun who built the building in 1855, he married three times and all three wives’ names were “Louise”. This is why the museum is called “Louisiana”. The piece includes story-telling and instructions for the listeners.

The performance was the final presentation of Asahi Eco Art Festival in Kochi prefecture, the festival started from researches on the cultures and eco-system of the Shimanto River. The 40 minutes composition was presented by members of Nakamura Symphony Orchestra, other local amateur musicians (include Japanese traditional instruments) and Kagura group (traditional ritualistic dance).

Relationship among Goats, Frogs and the Girls (2014)

The composition was commissioned in the context of a soundscape project in a local community in Chino-city, Nagano, Japan. 5 soundtracks, that were edited from a recording archive of the local soundscape, were played through 5 boomboxes. 5 dancers carried the boomboxes from the main station to the city concert hall through the city library. The dancers swung and threw the boom boxes.
The same materials were arranged for the concert version later, “Relationship among Goats, Frogs and the Girls (with video projection, piano and the girl)” for Electronics and Piano.

10 minutes electronic drone music played with 10 cassette tape players which were placed in Yanaka cemetery, Tokyo in the midnight.

Vocal drone music performed by a group of vocalists. They spread out on the pedestrian bridge in front of the Shibuya police station.