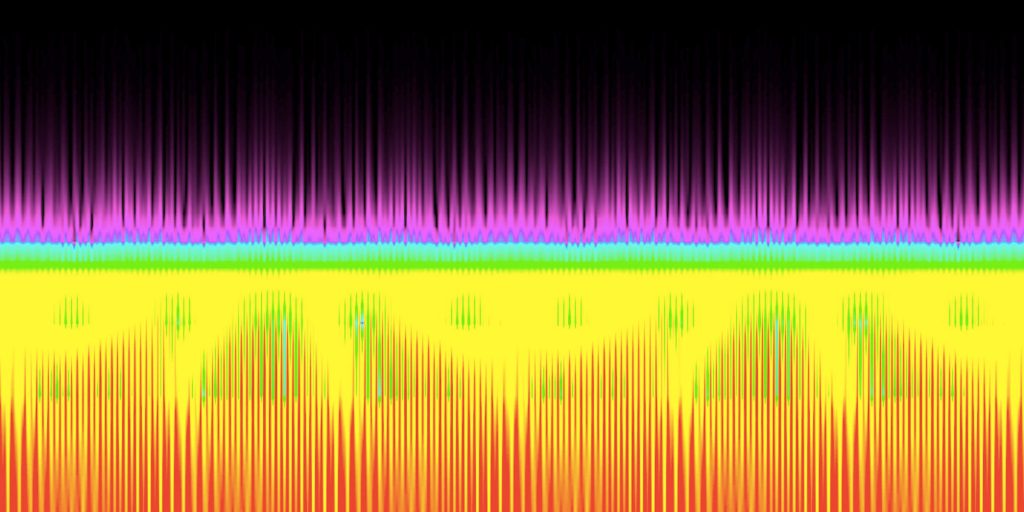 Spectrum of the mystic chord on a natural overtone series

Scriabin Synthesizer is a series based on the concept of the mystic chord by Russian composer, Alexander Scriabin. It adopts a media archaeological approach to the mystic chord, mysticism and numerology of Scriabin through the idea of sound synthesis. The mystic chord could be interpreted as a set of odd-numbered natural overtones minus the third overtone (the perfect fifth), it consists of the 1, 5, 7, 9, 11, 13th overtones. The accumulation of odd-numbered overtones is essential in the context of sound synthesis, triangle wave and square wave consists of odd-numbered overtones. The lack of the perfect fifth suggests it is atonal. The mystic chord is not a set of 6 tones, it is one synthesized sound. Nikolai Roslavets developed the idea with his synthetic chords. Originally, Scriabin reached the mystic chord from the dominant 7th chord, but, eventually, the mystic chord stands outside the harmonic cadence. It is not based on any sequence on a timeline. It doesn’t have the concept of time, even it is not music. In this meaning, it is a herald of “sound art”, and it corresponds to Russian cosmism and Nietzsche’s Eternal Recurrence philosophically. It is well known that Scriabin was influenced by synesthesia deeply, and the light-sound transformation was the primary method of early sound synthesis. Typically, the experiments of graphical sound synthesis by Arseny Avraamov and his group, Multzvuk show the transition from “synesthesia” to “synthesis” around 1930. And, needless to say, the big achievement was the ANS synthesizer, named after Scriabin.

Scriabin Synthesizer No.1 is a digital album of pure electronic sound, the album consists of 6 parts, total duration is 3 hours.

Sounds and all information are here
https://tomomiadachi.bandcamp.com/album/scriabin-synthesizer-no-1

“Scriabin Synthesizer No.2” is a piece for a piano and a fixed electronic sound part. All electronic sounds are derived from the ratios of 6 tones of the mystic chord on the natural overtone scale. The most of sounds are generated by sine wave oscillators, in many cases 36 of them (6*6). It is an additive synthesis it was another basic method of early sound synthesis. One exception is the use of the vocoder, it was the first sound modulation technology, invented as encryption technology. For this part, Zaum by Olga Rozanova is used freely. Zaum was Scriabin’s only contemporary Russian avant-garde experiment that interested him.

On the other hand, all of the piano parts are the expansion of the mystic chord based on the equal temperament. All notes are on an extended “Prometheus scale”, doesn’t include the octave transpositions. The conflict between the natural overtone scale and the equal temperament is an important aspect of the piece.

The piece was commissioned by HOYANO Miwa, for her solo recital in Tokyo Opera City in 2021, and performed by her after Scriabin’s ”Vers la flamme” (also the program included pieces by Roslavetz and Nikolai Obukhov.) This is why the piece has many references to ”Vers la flamme”, the route tone is E, and quotations of rhythmic fragments from ”Vers la flamme”.

Performed by Miwa Hoyano
Headphones or a stereo speaker system with sub-woofer is HIGHLY RECOMMENDED.
Very low frequency (around 40Hz) is important for this piece.