Literally, it is a Y-shaped string. Each end has a bridge with a piezo pick-up, the amplified sounds will be distributed to 3 channel PA system. Originally it was made for three players.
The first video shows some playing techniques, the second video is an original composition for this instrument, which is inspired by the coordination in Christian Wolff’s “For One, Two or Three People”.

TYSax consists of two saxophone mouthpieces and  two recorders, all components are integrated in one instruments, played by three performers. 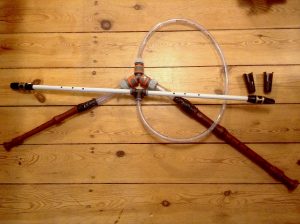 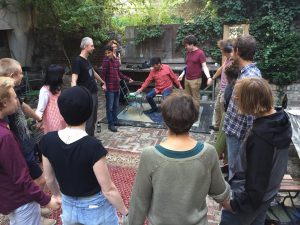 It has a reversed concept of the collective instruments. Some instruments form one instrument played by one performer.
This instrument has one pipe with a saxophone mouthpiece, which connected to two bells, one bell is some meters far, the end of the bell has another whistle, it makes sounds with inhaling. The pipe is also a bridge of guitar strings. 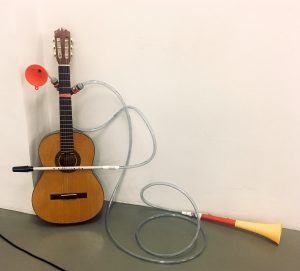